I know how many singing biographies start. I did start singing when I was young, but it was not some magical amazing skillful experience that prepared me for later times. I had really no idea what I was doing at all until I was twenty-one years old. For nostalgia’s sake though, I’ll start early.

I first really remember singing in a baptist church when I was in-between five and ten years old. I loved some of the songs there that I only really got reunited with many years later. I sang also through middle school and high school. In high school I fell in love with guitar and piano playing, music theory, and James Taylor, but I still had a really nagging question: How did people learn to sing high notes, and why did really no one seem to mention any sort of a method at all for achieving this, even those with degrees?

Upon leaving high school, I decided to figure out a teachable method by which this could be done. I remember that one of the books that I read was Lilli Lehman’s How to Sing. I remember that some of the things in the book were helpful, and some were beyond hard to understand. I think everyone gets lost when she starts to talk about the “pillars of the fauces.”

Anyway, I finally found a book called “The Tenor Voice” by Anthony Frisell, and it was the first book that actually talked about how someone could use targeted, specific, vowel based exercises, to unify the voice and the high notes, into a superior singing instrument capable of soft, loud, dark, bright and more across the whole range. You should see my copy of it, I went crazy highlighting things on every page!

I tried to do the exercises on the pages and to learn to sing myself. I did discover a lot of awesome things about the voice, but I didn’t really get all too close to what it is. Although I did exclusively sing with my falsetto for two years! Imagine that! I couldn’t even get my chest voice above middle c at the time, because I suppose I may have started to chase it out of the middle of my voice. Anyway, one day I decided to call Mr. Frisell with a question. I knew he was a very prestigious teacher, and I didn’t expect him to accept someone like me.

The Great Beginning of Apprenticeship

I was completely wrong! I came in to his studio, and after three weeks of lessons he got me to sing through the registers break from exercises, something I could never achieve before. I was thrilled. For the first six months, I studied once a week, then I studied twice a week, and for the last two and a half years I studied three times a week with Mr. Frisell, totaling about four and a half years. I paid just as much for four and a half years of study with Mr. Frisell -a man who taught some of and learned from many of the greatest opera singers in the world from the 40’s, 50’s, and 60’s- as someone would pay for one year at a major conservatory.

If you are curious about Mr. Frisell, he recently published his most recent book, Verismo! Enjoy! I haven’t even read very much of it yet! Also, by the way, the front picture is a young Mr. Frisell on the left, next to the great tenor, Mario Del Monaco.

Mr. Frisell isn’t teaching at the moment, but I will be writing much of what I learned at operarevival.com, and I will be publishing a really awesome book about this in the future, something I think not many are ready for!

Pavarotti said in an interview that it took him six years to sing well through the break. It took Jan Peerce close to eight years to train. I am patient with my voice! It is better to wait many years to get it perfect, than to rush and sing with a less than mediocre voice! Opera is so technically specific! The greatest are phenomenal, and the bad can be…rather bad. I hope to fill the world with much technical singing knowledge that is hard to get.

I am singing more now, and my voice is progressing like crazy. I may make a demo studio recording soon, and I am waiting for some advance developments on my voice so that I can get even closer to singing like my favorite singers, like Jan Kiepura! I hope to see you in the future! 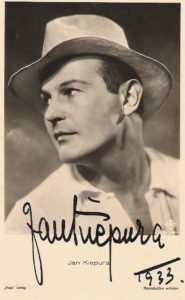